Aging is a natural, inevitable phenomenon with a progressive decline in cellular and organismal homeostasis accompanied by an increased risk of degeneration and mortality over time. The free radical, or oxidative stress, theory of aging proposes that the cellular damage caused by reactive oxygen species (ROS) plays a key role in the aging process and a key determinant of species longevity (Finkel and Holbrook 2000; Harman 1956). ROS are continually generated as by-products of a number of cellular processes and are also produced when the cells are exposed to various external stimuli such as ultraviolet light, ionizing radiation, and environmental cytotoxic substances (Jiang and others 2011). These unstable and reactive derivatives can cause damage to biological macromolecules such as lipids, proteins, and nucleic acids (Kultz 2005). The most common products of protein oxidation are the protein carbonyl derivatives of lysine, arginine, proline, and threonine (Shringarpure and Davies 2002). These derivatives are chemically stable and serve as markers of oxidative stress for most types of ROS. A wide range of age-related diseases such as Alzheimer’s disease, Parkinson’s disease, dementia and diabetes are associated with protein carbonylation (Dalle-Donne and others 2003).

In vitro, aging process was usually represented by an irreversible growth arrest of normal human fibroblasts, where they undergo a limited number of divisions in culture and progressively they reach at a state termed as replicative senescence (Trougakos and others 2006). Several cellular mechanisms malfunction upon senescence with the main secondary anti-oxidant mechanism, namely the proteasome, included (Chondrogianni and Gonos 2005). The proteasome is the major cellular non-lysosomal threonine protease, implicated in the removal of normal as well as abnormal, denatured or otherwise damaged proteins (Navon and Ciechanover 2009). Once cells are challenged with oxidative stress, the proteasome is activated. It degrades oxidatively and otherwise damaged proteins, thus preventing the formation and accumulation of protein aggregates that in turn have additional deleterious side effects (Farout and Friguet 2006; Friguet and others 2000) . The core particle, namely the 20S proteasome, is a barrel-shaped complex made of 28 subunits, 7 different α- and 7 different β- subunits, arranged as α1-7 β1-7 β1-7 α1-7 structure (Demartino and Gillette 2007). The 20S proteasome is also central to the ATP/ubiquitin dependent intracellular protein degradation pathway where it represents the proteolytic core of the 26S complex (Glickman and Ciechanover 2002). From in vitro studies it is evident that the 20S proteasome complex mainly recognizes and degrades oxidized proteins, but the 26S proteasome, even in the presence of ATP is not very effective (Davies 2001; Grune and others 1997).

In the last decade, there has been much interest in the potential health benefits of dietary natural anti-oxidants (Fusco and others 2007; Pandey and Rizvi 2009). Plant polyphenols (Pandey and Rizvi 2009), L-carnosine (McFarland and Holliday 1994; Shao and others 2004), Vitamin E (Packer and Smith 1974), are few examples of natural compounds that have been shown to exert a pro-longevity effect on human primary cultures. Given these findings, we sought to investigate the anti-aging properties of a potent, natural anti-oxidant supplement on human primary fibroblast cultures evaluating the 20S proteasome content and the amount of oxidized proteins.

Our in vitro results show for the first time the direct anti-ageing effects of an anti-oxidant supplement on human cells. Our preliminary in vivo studies that include administration of Khelma Longevity™ to human volunteers exhibit positive results as regards to endurance, blood pressure, cardiovascular function but a larger population study is needed for more solid conclusions (data not shown).

Given that we have already shown that the proteasome can be activated through natural compounds (Chondrogianni and others 2010; Katsiki and others 2007) fortifying the cells against oxidative stress and giving them an extended lifespan, we have examined whether Khelma Longevity™ as a potent anti-oxidant supplement may stimulate the proteasome function. We show that 20S proteasome content is induced upon Khelma Longevity™ treatment in HFL-1 human primary cells, accompanied by a deleterious effect of proteasome on protein carbonyl levels. This proteasome action seems to be diminished for Khelma Longevity™ concentrations greater than 1ug/ml under 24 h treatment while the increase of 20S proteasome content at concentrations above 0.1ug/ml for longer treatment did not appear to affect the protein carbonyl levels in a dominant manner even if there was a maximum decrease of protein carbonyls up to 84.7% in comparison to controls non-treated cells. This may be due to the synergistic activation of more than one anti-oxidant mechanism in the cell under longer treatment because of the strong antioxidant effect of Khelma Longevity™ supplement.

The described work was supported by Khelma Hellas S.A. to ESG.

Back to the Science Page 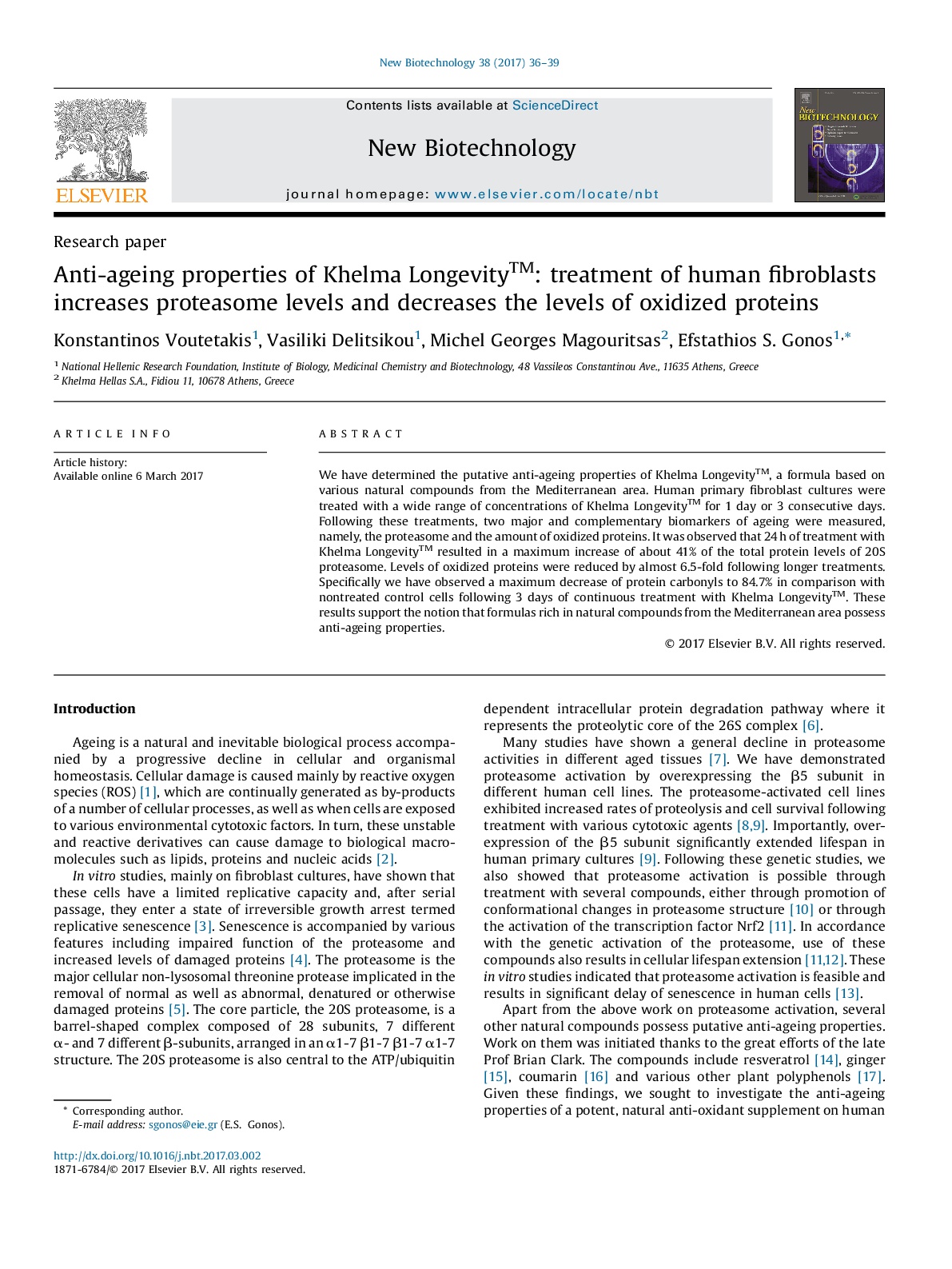 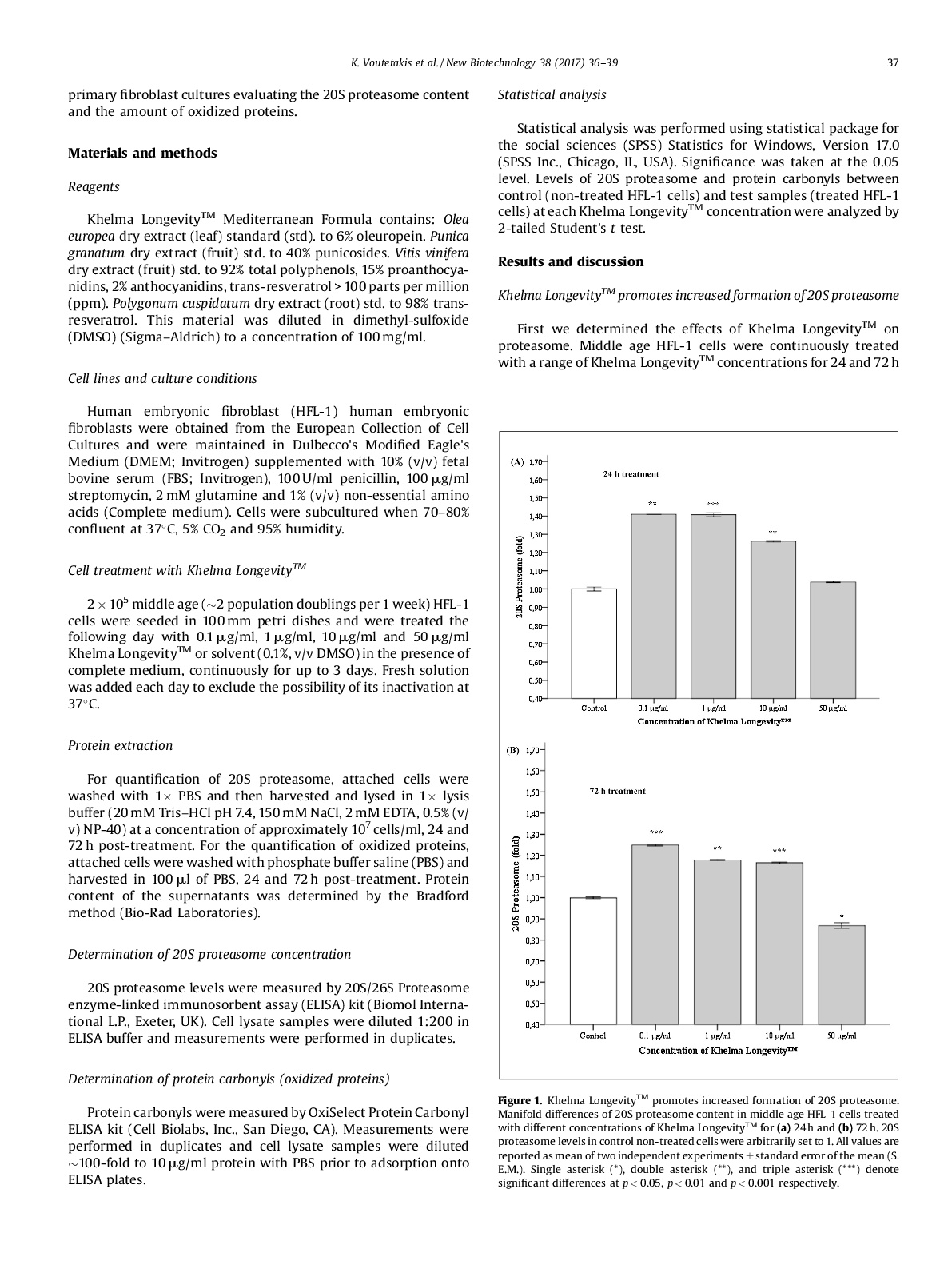 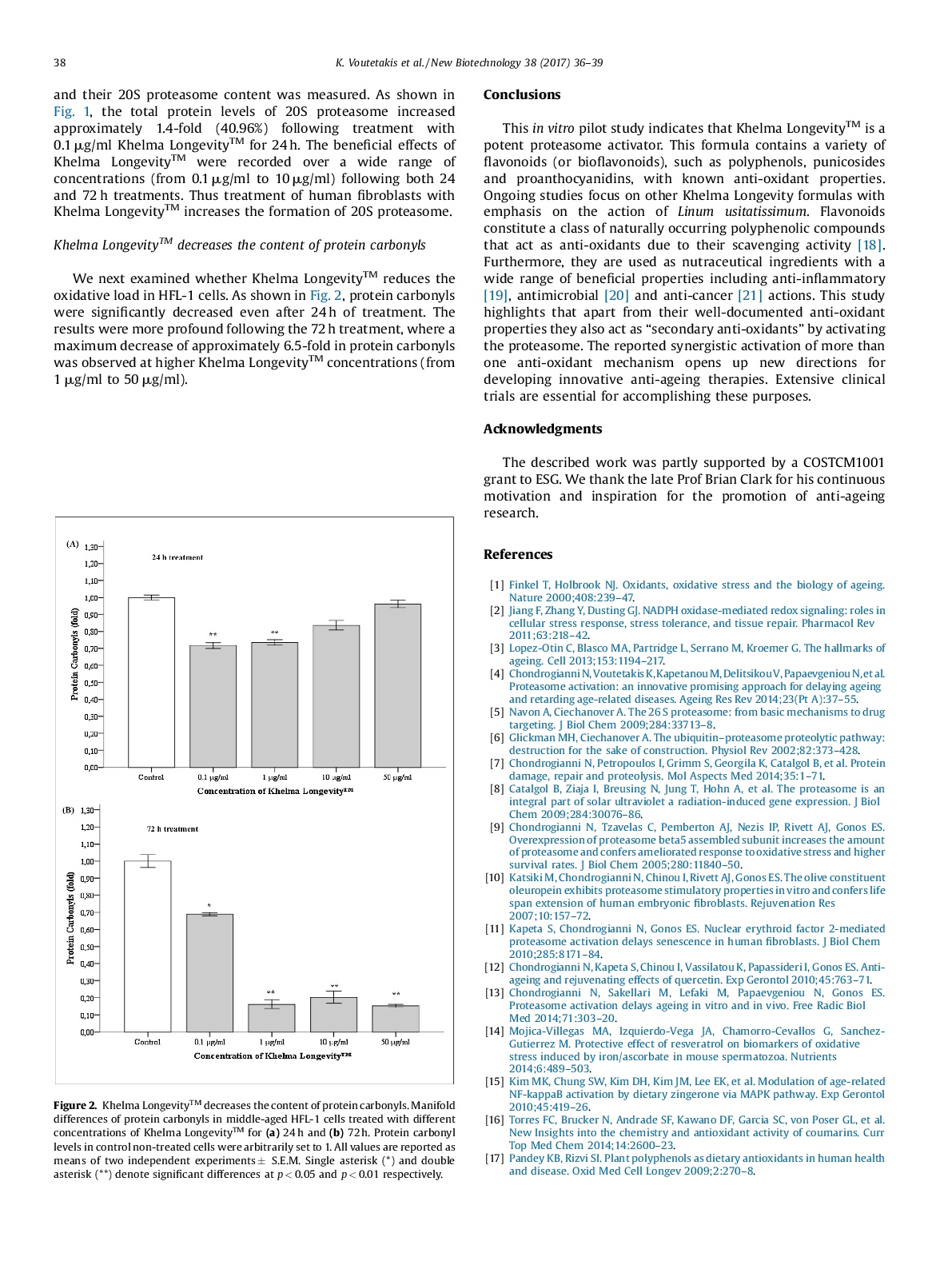 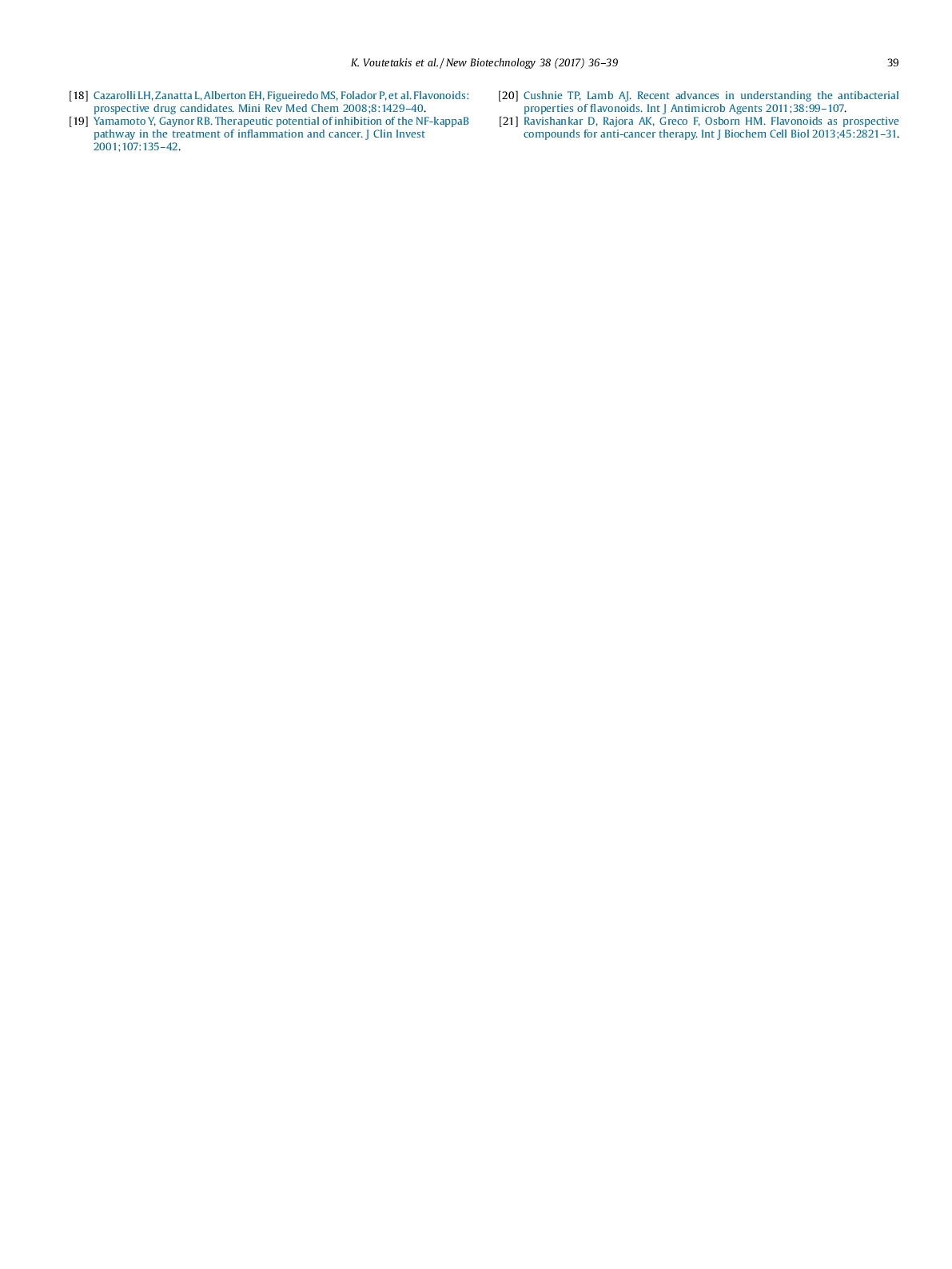 This site uses cookies. By continuing to browse the site, you are agreeing to our use of cookies.

We may request cookies to be set on your device. We use cookies to let us know when you visit our websites, how you interact with us, to enrich your user experience, and to customize your relationship with our website.

Click on the different category headings to find out more. You can also change some of your preferences. Note that blocking some types of cookies may impact your experience on our websites and the services we are able to offer.

These cookies are strictly necessary to provide you with services available through our website and to use some of its features.

Because these cookies are strictly necessary to deliver the website, you cannot refuse them without impacting how our site functions. You can block or delete them by changing your browser settings and force blocking all cookies on this website.

These cookies collect information that is used either in aggregate form to help us understand how our website is being used or how effective our marketing campaigns are, or to help us customize our website and application for you in order to enhance your experience.

If you do not want that we track your visit to our site you can disable tracking in your browser here:

We also use different external services like Google Webfonts, Google Maps and external Video providers. Since these providers may collect personal data like your IP address we allow you to block them here. Please be aware that this might heavily reduce the functionality and appearance of our site. Changes will take effect once you reload the page.